Emmeline Pethick was born in 1867, and became a socialist during the 1890s. She married Frederick Lawrence in 1901, becoming Mrs Pethick-Lawrence. Emmeline joined the Women's Social and Political Union in 1906, but was expelled in 1912 after a disagreement. In 1907, Emmeline and Frederick began publishing Votes for Women and their London home served as both the Union's office and a suffragettes' recovery centre. Emmeline served six prison sentences for her socialist beliefs and died in 1954. This postcard, which is part of the William Crowther collection, was produced between 1907 and 1912, as it refers both to Votes for Women and Emmeline's Union membership.
photo
England
Inv. Nr.:
NMLH.2001.15.15
Institute:
PHM 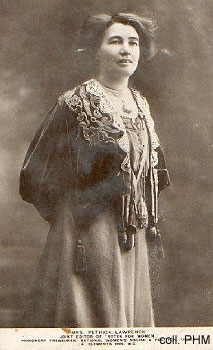