“We are on our way to buy Coop’s Circle Coffee!”

Coffee advertisement of Cooperative store Elanto. The first cooperative experimentations in Finland can be dated in the 1880s. At the turn of the century consumers’ cooperation gained a steady footing in our country. The first workers’ coop was founded in Tampere. Cooperative Society Elanto was founded in Helsinki in October 1905. In 1916 the Finnish cooperative movement split up ideologically when the progressive people (workers) established their own central organization and the next year own wholesale company OTK. OTK built own industrial plants e.g. to cure Baltic herrings in 1918, a match factory in Tampere in 1926 and a coffee roasting house in Helsinki in 1927.
glass slide
Finland
Institute:
Tyark 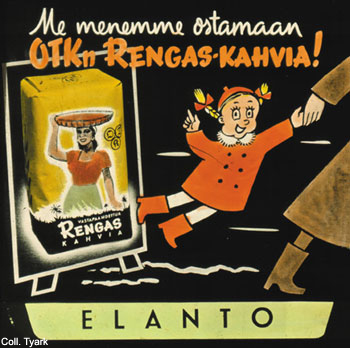