In Italy the political satire of socialist orientation is tied up mainly to the names of Guido Podrecca and Gabriele Galantara, the latter illustrator of the 'Donkey', a newspaper that, at the beginning of the twentieth century, achieved a great popularity all over the nation thanks to its sharp graphics, its anticlericalism and its accurate critical intervention on the political life of the country. It has been forced to close in the 1925. Newspaper, Rome, Milan, published from 1893 to 1925
periodical
Italy
1901
Inv. Nr.:
Per.It.S.A.166
Institute:
Fondazione Lelio e Lisli Basso 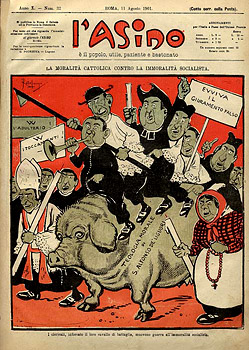