This banner was made for the Great Dock Strike of 1889 when workers sought an extra 6d (2½p) on their wages, the 'dockers tanner'. It was also carried in the Transport Strike of 1912 and the Poplar Rates dispute of 1921. The technique used to make the banner follows the style of naval flag making. The letter fabric shapes are sewn into corresponding holes cut into the main fabric ground, rather than being sewn onto the surface. Both ground and lettering fabrics are plain woven wool 'bunting'. The banner was given full conservation treatment in the People's History Museum Textile Conservation Studio in 1997.
banner
England
1889
Inv. Nr.:
NMLH.1993.705
Institute:
PHM 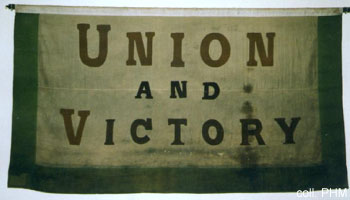