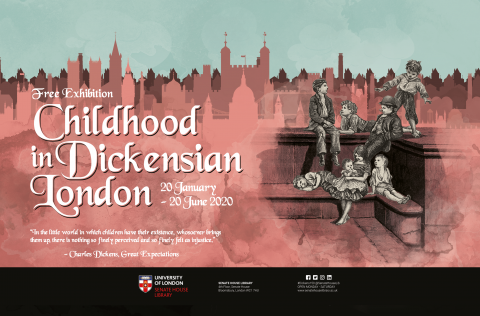 A new exhibition Childhood in Dickensian London opens 20 January 2020, to mark the 150th anniversary of Charles Dickens's death, celebrate his life, and work as one of the world’s most-loved writers on childhood. The exhibition explores Victorian London from the 1830s until the turn of the twentieth century, focusing on Dickens’s child characters and exploring the role of Dickens writing in helping to create a better childhood for us all. It is free and open to the public until 20 June 2020 at Senate House Library, University of London.

On display are some first edition copies of Dickens’s most-loved novels, examples of his journalism, and some intricate drawings and sketches of Dickens and the characters he created. There are also books and documents relating to wider social reform in Victorian-era London, all of which are from Senate House Library's vast collections. These are complemented by some of Dickens’s personal items, such as one of his walking sticks used on his ‘night walks’ in London, on loan from The Charles Dickens Museum in London.

There are four themes in the exhibition (listed below) and over 80 items on display exploring the issues experienced by children growing up in Victorian London. Focusing on social injustice through Dickens’s best-known deprived child characters, you can put yourself in the shoes of a young child growing up in the 1800s and consider how much things have changed two centuries on.

With special thanks to The Charles Dickens Museum, and Senate House Library colleagues Dr Richard Espley, Argula Rublack and Alea Baker for their support.