Video: Commemoration of The Paris Commune 1871 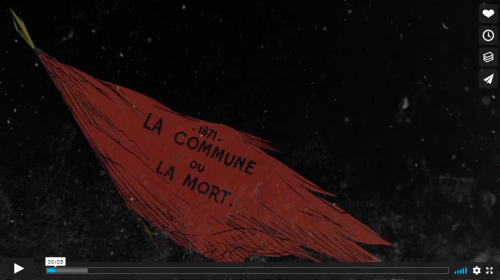 Dutch voice over with English subtitles, and of course a lot of French content
Brought to you by Amsab-Institute of Social History

Paris, 18 March 1871. Exactly 150 years ago. The aftermath of the Franco-Prussian War. A starving city, ravaged by disease and epidemic. A people who rebelled and erected barricades everywhere to defend the city against the army. A government that fled. And the people who took control themselves. The Commune was born. With the red flag as a symbol of resistance against the rulers.

The Commune had been democratically elected and carried out radical reforms. Was this the beginning of a world revolution? The End of Capitalism? That hope was brutally shattered by the gun violence of the army reclaiming the barricades one by one. In the week of May 21-28, not only the revolution died, but a large number of women, men and children were killed, 30,000 in all. Thousands of them were executed without trial. That week went down in history as La semaine sanglante or the Bloody week. With the execution of the last 147 communards against a wall of the Père Lachaise cemetery as a bloody final act.

The commune was over, but a legend was born. A legend that was passionate, that fascinated, but also divided. According to the radicals, the communards had been too soft and had spared their enemies too much. The moderates said that the solution was not violence but association and organization.

In Belgium, too, the Commune was commemorated, its heroes revered and its ideals praised. The 18th of March became a red heyday. With fiery speeches, music and singing. The commune was a symbol of resistance. It became immortal, a "souvenir que je garde au cœur", memory that I keep in my heart.