Back to Port Adelaide and the Workers Memorial.

Keen readers will remember the Workers memorial from our previous issue. Lots of great people and stories go with all the names. One in particular is Ernest James Harrison – killed at Port Adelaide by scabs in 1932

He was stabbed to death by outside the Royal Arms Hotel on 15 January 1932. The wharfies were in dispute and many Italian workers had volunteered on the waterfront. Ernie was fatally stabbed by Egidis Dallora who got three years for manslaughter because the judge said there was “provocation”. The funeral cortege pictured here was a mile long. 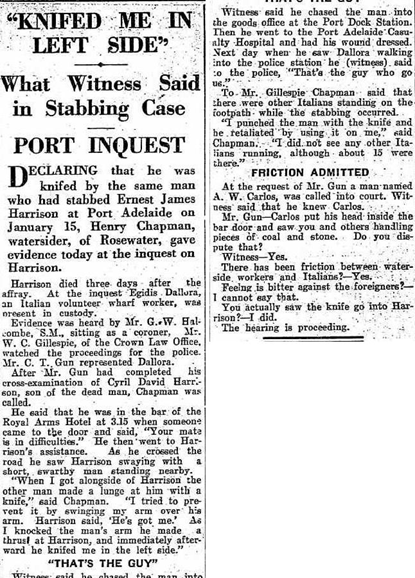 This dispute was part of the ongoing struggle by the WWF against the “Dog Collar” Act introduced in 1928 that sought to licence waterside workers (thus aiming to keep militants at bay. 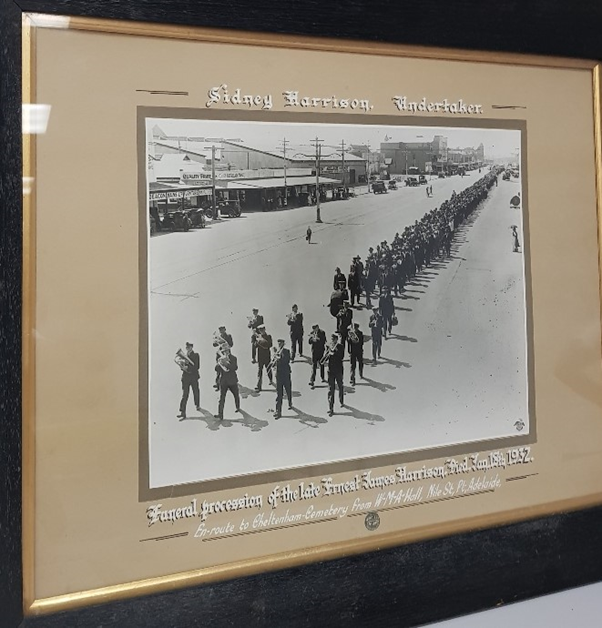 Photo from the MUA South Australia

Up the road from Port Adelaide is Port Pirie. It was at one point even busier than Port Adelaide. More wheat went out from the Port than from Port. Port Adelaide shipped more flour though. It really took off when the lead smelter was established in 1889. Port Pirie remains the second busiest port in South Australia.

According to the State Library of South Australia “With the railway line open everything for and from Broken Hill went through Port Pirie - timber for the mines, coal and mining gear and outwards the ore and processed minerals. Smelters were built at Port Pirie and the face of the town changed rapidly - it became an industrial town as well as a port.

In 1889 11,000 tons of coke was sent in six months from Port Pirie to Broken Hill; 4 million superfeet of timber was handled; 11,244 tons of silver-lead bullion was despatched and BHP (Broken Hill Proprietary Ltd) paid 69,000 pounds for railway cartage and labour.”

The first lead smelter was built in 1889, then BHP built its own in 1892. In 1915 Broken Hill Associated Smelters (BHAS) – a joint venture of the Broken Hill mining companies took over the smelter. In 1934 it was expanded and became the largest in the world. It has been owned by Nyrstar since 2007. 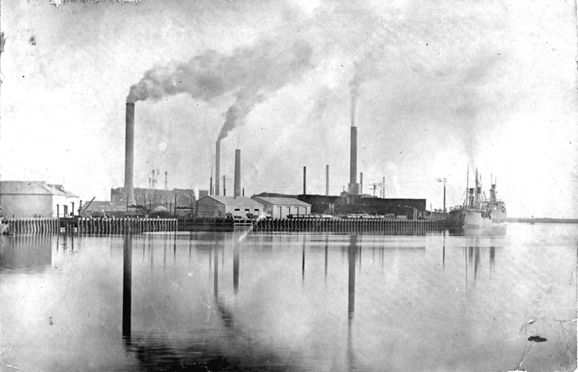 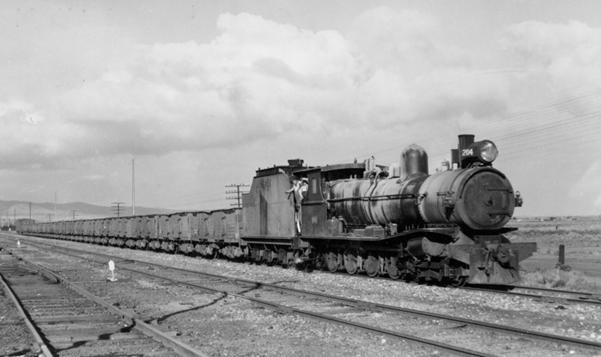 In 1925 the impact of lead dust was identified as a major problem by a South Australian Royal Commission.

Lead smelters are a major health issue, and Port Pirie records much higher lead samples in blood than is recommended, despite smelter upgrades in 2014. In 2012 it was found that over 3000 children had been lead poisoned in Port Pirie in the previous ten years. Childhood exposure to lead has been linked to lower IQ and academic achievement, and to a range of socio-behavioural problems such as attention deficit hyperactivity disorder (ADHD), learning difficulties, oppositional/conduct disorders, and delinquency. The disabling mental health issues from lead exposure often persist into adolescence and adulthood. 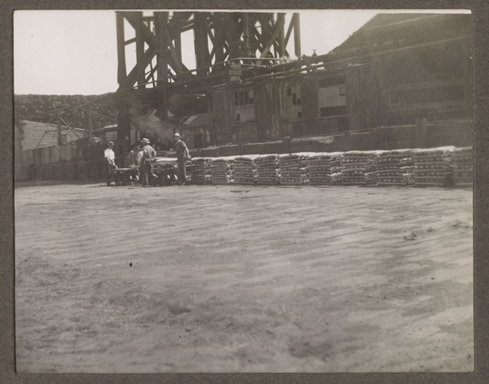 Dolphins that became stranded in the Port have also shown much higher lead levels than dolphins stranded elsewhere in the Spencer Gulf.

Port Pirie and Broken Hill are linked very strongly via the minerals they dig up and process. Solidarity amongst the workers has had many ups and downs however.

The Lockout at Broken Hill in 1909 was a massive battle with BHP, and the lack of solidarity from Port Pirie was part of the reason for defeat, despite trips to the Port by Tom Mann and initial enthusiasm from the Port Pirie smelter workers. New tactics came about in 1915 when a 44 Hour week demand and protection from dust diseases were the factors in the strike. https://medium.com/this-working-life/how-a-100-year-old-union-got-its-st...

The unions had learnt a lot from the lessons of 1909 and a new generation stepped forward to make sure the struggle was a winning one. As well as the dust issue, the 1915–1916 dispute focussed on the underground miners’ refusal to work on Saturday afternoon, thus reducing their hours from 48 to 44.

The loss of European markets saw 9000 jobs lost in Broken Hill at the beginning of the war. Relief work on a railway line to Broken Hill, and on a water supply scheme, helped keep people in town for the hoped-for re-opening of the mine.

According to Edgar Ross workers stormed the Town Hall. An unemployed movement was very militant and active, fighting against things such as evictions when former mineworkers couldn’t pay the rent.

Women fought for and won the right to accompany husbands sent to work on the Condobolin end of the railway line.

The mine owners saw the expiration of the industrial agreement in mid-1915 as a chance to force the workers to accept lower conditions. At first this seemed to work, with the Barrier Amalgamated Miners Association members agreeing with the bosses.

The Port Pirie men this time raised their voices against the agreement and shamed the Barrier men into requesting a conference with the mine managers.

The Arbitration Court, under Justice Higgins, was involved in the negotiations over several months, but things reached a peak in September when the AMA voted (just) to stop working on Saturday afternoon.

Soon after, this vote was overturned at a mass meeting. The underground workers met separately and continued the strike.

Percy Brookfield, an underground miner since around 1911, came to the forefront of the fight.

He had personally seen the toll lung disease had taken on his own family members. He had helped men too who had been overcome with fumes or injured in rock falls following explosions. All these issues all coalesced in 1915.

The Eight Hour march in October 1915 saw issues come to a head. Many miners held placards stating simply “If you want a 44-hour week TAKE it”. 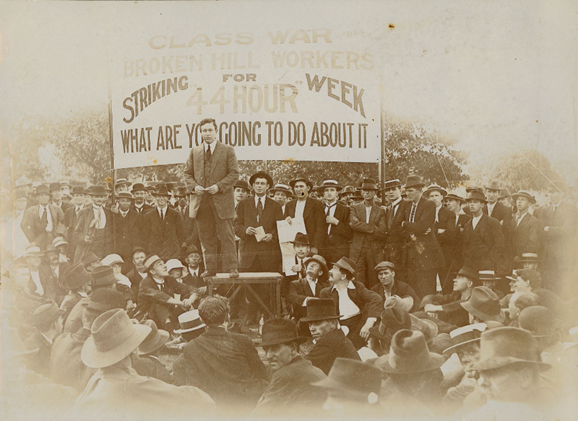 This time the solidarity of the workers in Broken Hill and Port Pirie were the key factors in the workers’ eventual victory.

The workers were faced with the usually strikebreaking syndrome — starvation — but the companies were seeing profits decline as renewed demand for the ore couldn’t be met.

The Broken Hill workers secured financial support from unionists across Australia and New Zealand. An agreement was reached in February 1916, with work initially to recommence four days per week.

The underground workers were not happy: they wanted to win their 44-hour week demand.

Overtime rates were also increased and a minimum wage for contract miners was set (most miners were contractors).

Dale described the victory as demonstrating “the power of solidarity on the part of a militant section of the union that knows just what it wants and how to get it”.

There is a great story on part of this struggle in The Hummer. Bert Speck of Port Pirie AMA left town with the union books in 1916, disgusted with the lack of solidarity from the Port Pirie workers in the 44 hour week struggle. 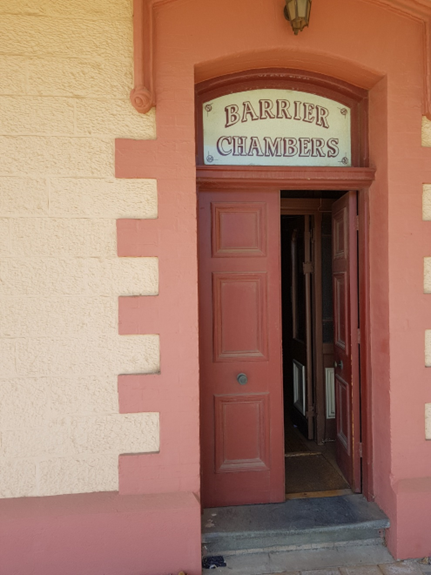 Illustrating the connection between Port Pirie and Broken Hill. Barrier Chambers building right next to the port area.

The Barrier Daily Truth reported (when Speck died) that “He was overwhelmed with the opposition to his appeal to his fellows to make common cause with Broken Hill, and left with the books and property for the Barrier. He chose the starvation coupon and sacrificed his job and when he got off the train, at Sulphide Street station he was carried shoulder high to the Trades Hall. Mr Speck went to work on the mines when a resumption was made on the basis of the 44 hours week after the short struggle had ended and had worked underground practically ever since till his fatal illness attacked him.

In the anti-conscription campaigns Mr Speck was ranged with the unionists of Broken Hill, and again in the big strike of 1919-20 he was a prominent worker in the cause of shorter hours, better wages, improved conditions and compensation. He served his union in various capacities and was one of the mine workers’ representatives on the Joint [Compensation] Committee.” 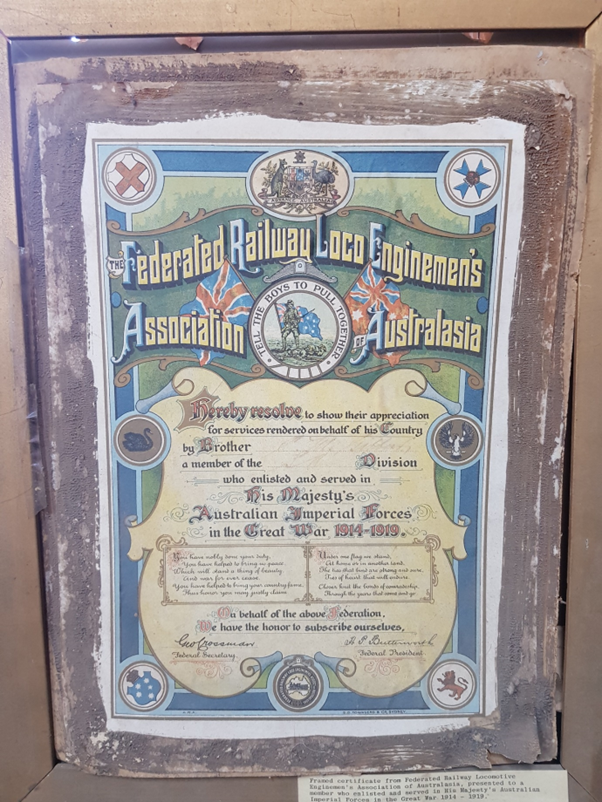 An unusual AFULE certificate in the Port Pirie Museum appreciating a fellow unionist who volunteered in World War One Unions opposed the war but honoured their members who volunteered. Adelaide unionists ran the first ANZAC parade in October 1915 to raise funds for returned men who arrived back with no pension or support from the governments who had urged them to enlist. See Gareth Knappman Adelaide and the birth of Anzac Day

Damien Minton, a TinSheds veteran ran a poster exhibition and sale at the Lord Gladstone in Chippendale at the end of April. Great stuff from all the artists who were:

We spent a bit but could easily have bought more. Here are a few examples. You can contact Damien for more. 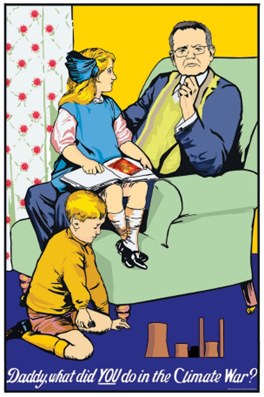 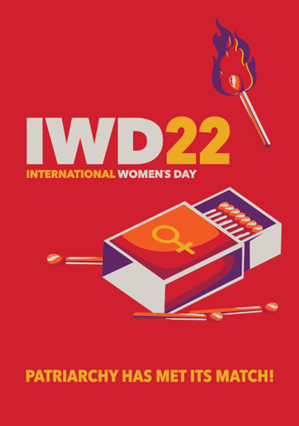 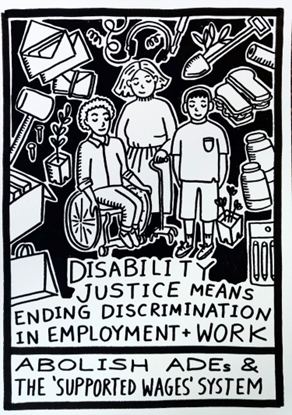 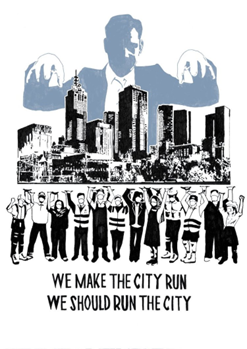 We travel to Wagga Wagga with our Jack Mundey exhibit in June. It commences just before the long weekend and will continue until the end of July