Rare collection of price currents digitized at the IISH 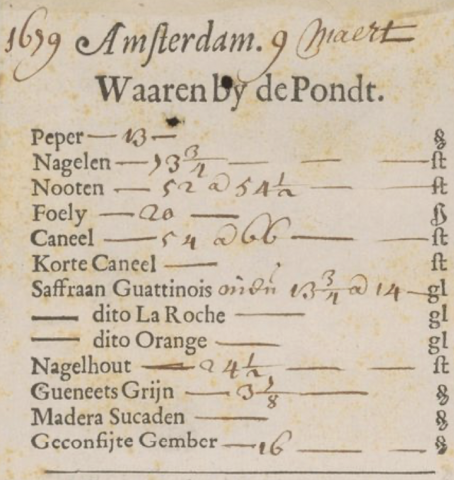 The IISH is proud to present a new online collection: the digitized price currents. What was the price of candied ginger sold in 1679 Amsterdam? How much did elephant teeth cost in 1817 in Amiens? Growing trade meant a growing demand for information on market at the end of the Middle Ages. The solution were printed lists that showed traded goods with the current prices next to it, often written by hand. These price currents from as early as the 16th century and from all over the world give us a wealth of information on past economic life.

Many price lists with prices for sugar, coffee, tea, tobacco and textiles relate to the Netherlands, and Amsterdam in particular, as a trading centre. But the collection also includes price lists of other important trading centres all over the world: from New York to Leningrad, from Buenos Aires to Jakarta.

Prices are essential data for the reconstruction of economic developments like economic growth, the integration of the world economy and the development of living standards. N.W. Posthumus, the first Dutch professor of economic history and founder of the IISH, knew the worth of these documents. In the 1930’s he made great efforts in collecting price lists and compiling long price series. Because price lists are volatile, vulnerable material intended for daily use, it’s special these documents have survived through the centuries. Thanks to Posthumus the IISH now holds this extensive and rare collection.

With the help of Metamorfoze, the Netherlands' national programme for the preservation of paper heritage, thousands of price lists have been digitized and are now accessible to the general public.

Link to the collection: https://search.iisg.amsterdam/Record/ARCH03972