Poster celebrating resistance by the American Indian Movement (AIM). AIM was formed in 1968 to combat police brutality and corruption at the Bureau of Indian Affairs (BIA). In 1973 AIM supported a group Oglala Sioux opposed to the dictatorial rule of BIA supported tribal chairman. For over two months AIM, armed with shotguns and .22 rifles held out against elements of the 82nd Airborne Division, Federal Marshals, and Phantom jets. Wounded Knee had also been the site of a brutal massacre of the Sioux - mostly women, children and elderly men - by the U.S. Army in 1890.
poster
United States
Inv. Nr.:
US 37.5-5
Institute:
Tamiment 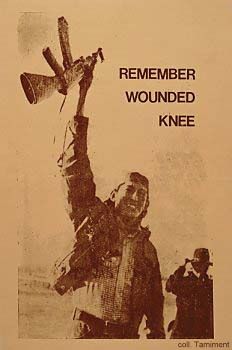