A school for Lapp children

Lapp children outside their school in Sandnes, Sør-Varanger, 1901. Up to the last war, a majority of these schools aimed to Norwegianize the children, and Lappish language and culture were suppressed. The photographer is Ellisif Wessel, who together with her husband, doctor Andreas Wessel, were pioneers in the labour movement in Finnmark, the northernmost county in Norway. Besides being a competent photographer, Ellisif Wessel was an industrious contributor to the labour press. She also wrote two collections of poems and one children's book and published for a time her own periodical.
photo
Norway
1901
Inv. Nr.:
2185/w16
Institute:
AAB 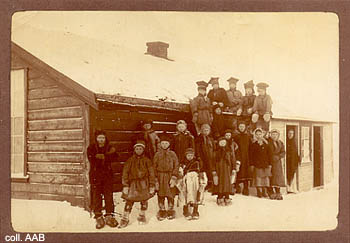