Banner from a labour youth organisation

The outbreak of the first World War in 1914 intensified the already prevailing pacifistic and anti-militaristic attitudes in the Norwegian labour movement. Especially the youth movement took up the fight against war and militarism. This banner from 1917 belonged to a labour youth organisation in the small community of Kragerø, in the southern part of Norway. As in many labour banners from this period, the motive depicts hope for a better future. The young mother and her children comes out into the light to a new society, where the swallows are building their nest in an overgrown cannon muzzle.
banner
Norway
1917
Inv. Nr.:
2681/dias917
Institute:
AAB 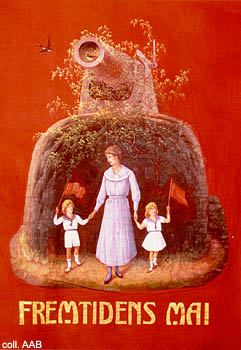