In 1935 an agreement between the Labour Party and the Agrarian Party made the formation of a labour government possible. Before the election of 1936 a huge propaganda apparatus was launched with the aim to secure an absolute majority for the party in parliament. Even if the election was a large victory for the party, the main goal was not reached. The building in the background is the Folketeater (The people's teatre) building on Youngstorget in Oslo, built in 1933 as a centre for cultural activities in the labour movement.
photo
Norway
1936
Inv. Nr.:
3121/958
Institute:
AAB 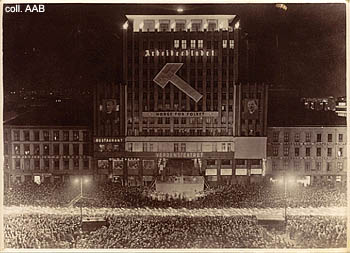