October 15th 1998 saw the largest joint trade union action ever in Norway, when 1,2 million members all over the country participated in a two hours' demonstration against the non-labour government's plan to reduce the holidays and change the rules for sickness benefit. In Oslo thousands of people gathered outside the Parliament building, where the leader of The Norwegian Confederation of Trade Unions (Landsorganisasjonen), Yngve Hågensen, was among the speakers.
photo
Norway
1998
Institute:
AAB 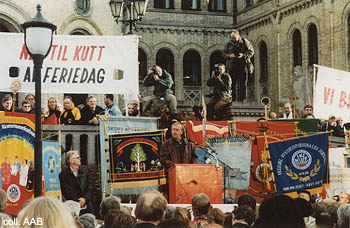