It appears from the first article of the minutes that already on the 3rd of March people had gathered in order to pursue the case on the initiative of manufacturer V. J. von Wright. Then the case was to found a craftsmen’s association but the 3rd of May meeting in 1883 is already called a meeting of workers’ association. At this phase the idea was cooperation between employers and employees and the raising of the educational level of workers. The objective of employers was to prevent the spreading of socialism to Finland. The associations in Vaasa and Helsinki competed for the honour of first association but Vaasa came a few months after Helsinki.
manuscript
Finland
1883
Institute:
Tyark 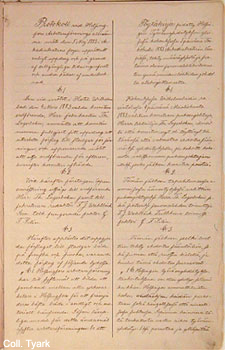