The Finnish Labour Party was established in Turku in July 17 through 20 under socialists’ lead and bourgeois people withdrew. In 1903 the party adopted a socialist programme and was re-named the Finnish Social Democratic Party. In the foreground sitting on an arm-chair is the chairman of the Swedish Social Democratic Labour Party, the chief editor of the newspaper “Social-Demokraten” Hjalmar Branting. Behind the table sits the chairman of the meeting and the first chairman of the Finnish party N. R. af Ursin, on his right the secretary of the meeting and the first secretary of the Party Executive J. K. Kari.
photo
Finland
1899
Institute:
Tyark 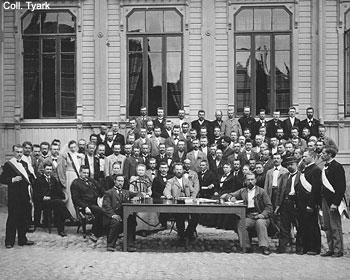