Constitutive meeting of the Woodworkers’ Union

The first national trade union in Finland was founded by bookworkers in 1894. Socialist ideas were little by little spread among the labour movement and proletarian radicalism was strengthened especially in bigger towns. At the turn of the century for instance bookworkers, tailors, joiners, masons, metal workers, carpenters and painters had held national meetings and established trade unions. The meeting of the Woodworkers’ Union in Tampere on July 20 was held on the eve of the General Strike and thus the slogans “Universal suffrage” and “The country must be built with law” reflect well the opinions of that time.
photo
Finland
1905
Institute:
Tyark 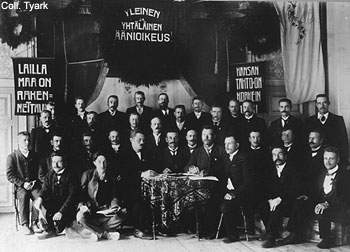