The text reads as follows: “Discipline number 1. Damn and blast you red Russki, bloody cadger! By the wall right away! If I don’t kill you, you are sure to kill me! (The words of K, a defender of the fatherland, in Hennala soup queu anno mundi 1918).” The Finnish civil war in 1918 was one of the cruellest and bitterest in western countries. During the war c. 3200 whites and c. 3500 reds were killed. Arbitrary executions were made in both sides: the reds killed c. 1 650 and the whites c. 8400 persons. The final numbers are still unknown. The whites had already at an early stage discussed the ways to punish the rebels and establishment of a concentrated prison camp system. The total number of prisoners was over 80 000 at its height. 12 500 reds perished in the prison camps. Furthermore prisoners who were weakened by hunger and diseases died after their release from the prison camps.
manuscript
Finland
1918
Institute:
Tyark 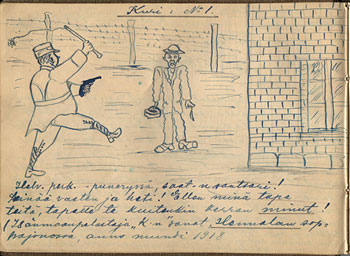