1945 was an important year for the British Labour Party. Founded in 1900, it had twice formed governments in 1924 and 1929, but it did not enjoy a majority in either of these and was heavily defeated by a coalition of all the bourgeois parties in 1931. In 1940, just before the fall of France, on the invitation of Winston Churchill the Labour Party joined a coalition government. Its leader Clement Attlee became deputy Prime Minister. When the war in Europe ended, an election was called. Labour presented the country with a radical programme, including the nationalisation of coal, railways and steel; the formation of a National Health Service; and a nationwide extensive housing programme. Labour won the election with a majority of 160 parliamentary seats. Most of the Manifesto promises were carried out within five years. The V for Victory symbolises the Labour Party’s commitment to Britain winning the war. The point was, however, that Britain had to win the peace.
book
England
1945
Inv. Nr.:
Ref. 329.12, Labour Party Library
Institute:
LHASC 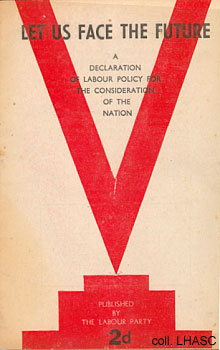