The Women’s Labour League (1906-1918) first produced a monthly newsletter for its supporters in 1906. The League was formed as an institution organized exclusively for and by women, and affiliated to the British Labour Party. It was committed to the cause of Labour representation in parliament. In 1918, after the vote was given to propertied women over the age of 30, the League was dissolved and its members formed the Women’s Section of the Labour Party. The League’s monthly newsletters, also known as the League Leaflet, took the name Labour Woman. Describing itself as a political paper for working women, Labour Woman covered a range of topics from women’s work, housing and childcare to politics and education.
printed matter
England
1923
Inv. Nr.:
Labour Woman, January 1923, Vol. XI no. 1, Labour
Institute:
LHASC 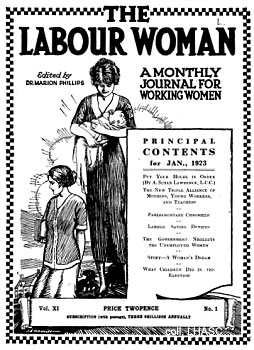