Many British working people were disappointed when the 1832 Reform Act failed to give them the vote. This disappointment turned to anger when the reformed House of Commons passed the Poor Law of 1834. In June 1836 William Lovett, Henry Hetherington, John Cleave and James Watson formed the London Working Men's Association. At a meeting in 1838 the leaders of the Association drew up a Charter of political demands which gave the group the name ‘Chartists’. The charter sets out the six Chartist demands: universal suffrage, no property qualification, annual parliaments, equal representation, payment of members, vote by ballot. Today all except one (annual parliaments) are enshrined in British law.
printed matter
England
1838
Inv. Nr.:
VIN/6, Vincent/Pickles Collection
Institute:
LHASC 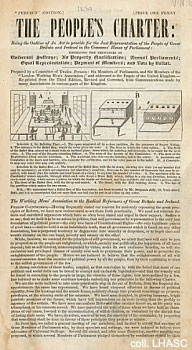