Tom Mann (1856-1941) was a skilled engineer who moved to London from the Midlands in 1877. Over the next ten years, he worked in many different jobs in London and New York, joining the Amalgamated Society of Engineers in 1881. In 1884, he joined the Battersea Branch of the Social Democratic Federation, to which John Burns already belonged. He became an eloquent and well known speaker, campaigning in particular for the 8 hour day. In 1889, Mann became one of the leaders of the London Dock Strike, initially in charge of organising relief tickets, then organising pickets and finally of the whole Surrey side organisation.
photo
England
Inv. Nr.:
T0051
Institute:
TUC 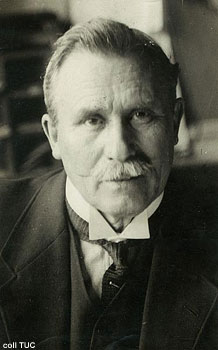