How British was Big Jim Larkin? How international was Larkinism? 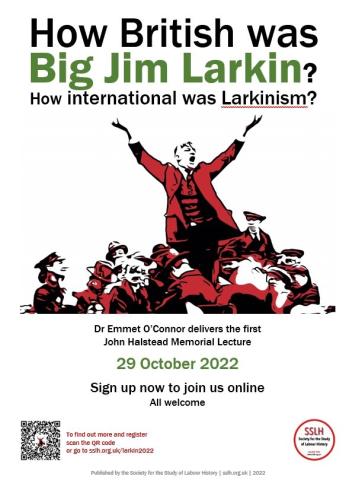 Dr Emmet O'Connor will deliver the annual lecture of the Society for the Study of Labour History (SSLH) in honour of John Halstead (1936- 2021). For the majority of attendees this will be an online event. A Zoom link will be circulate a few days before the event.

John Halstead was one of the earliest members of the Society for the Study of Labour History. For over six decades John occupied nearly every post within the Society, contributing his time and expertise to serve as editor, chair, secretary and latterly vice-president. He was much admired and the Society misses his smiling face, institutional memory of Society matters and his encyclopaedic knowledge .

Dr Emmet O'Connor is a Senior Lecturer at the University of Ulster. He has written extensively on Irish labour history and recent publications include: 'Greater son: James Larkin Junior, 1904-1969' (2020); 'In Spanish Trenches': The Mind and Deeds of the Irish Who Fought for the Republic in the Spanish Civil War (co-authored with Barry McLoughlin, 2020) and the first full length biography of Jim Larkin, 'Big Jim Larkin: Hero or Wrecker' (2015). Emmet was a personal friend of John's and the Society is delighted he has agreed to deliver this memorial lecture.

Dr O'Connor's lecture will be upon:

How British was Big Jim Larkin? How international was Larkinism?

Born in Liverpool in 1874, Big Jim Larkin always insisted that he was Irish. None have ever challenged him on the claim, or seen him as anything other than a uniquely Irish figure. And yet, there was a British dimension to Larkin’s outlook. Liverpool gave him a love of soccer and travel, and shaped his interest in socialism and literature. He first went to Ireland in 1906 as an agent of a British trade union and remained keenly engaged with British Labour up to his departure for America in 1914. During the Dublin lockout in 1913, Larkin demanded aid from British workers with a sense of entitlement that no other Irish Labour leader would have entertained. Larkin’s ‘fiery cross’ campaign made the lockout a part of British labour history. Larkinism too should be lifted out of a purely Irish context. One might argue that it was not only a subset of the ‘Great Labour Unrest’ than shook British industrial relations between 1911 and 1914, but a reflex of international trends in industrial conflict and growing support for syndicalism between 1890 and 1914.

John's family and those attending the SSLH Exec meeting and AGM will be able to attend the memorial lecture in person at the John Rylands Library, Manchester. There will be a small number of additional 'in person' tickets available. Please contact Janette Martin if you would like to attend the physical lecture in Manchester. We will try to accommodate as many people as possible

The event takes place online and is open to all. There is no charge. Registration is required via https://www.eventbrite.co.uk/e/john-halstead-memorial-lecture-tickets-326429357997