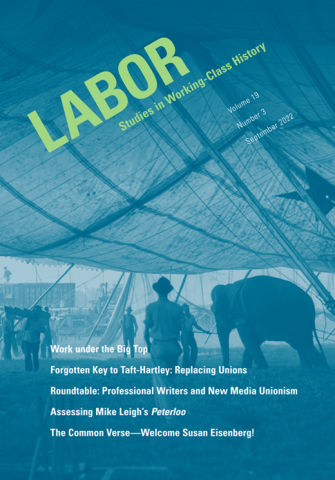 Over the last decade digital humanities has swept through the academy, touching almost every field of inquiry and energizing a number of disciplines. Labor history was an early leader in this initiative, with pioneering digital work by Roy Rosenzweig, James Gregory, and others. In recent years, however, it has lagged somewhat, though there are signs that this is beginning to change. A group of researchers associated with Workplaces: Pasts and Presents, part of the European Labour History Network (ELHN), recently launched several new projects that aim to accelerate our field's move into the digital realm. These include a podcast titled Workplace Matters and a website composed of a series of curated multimedia exhibits that showcase our ongoing research into the history of the workplace, workers movements, and working-class culture (https://workplaces.omeka.net). These initiatives draw on a range of disciplinary methodologies and on the tools provided by digital humanities to archive, curate, and disseminate our findings to audiences of students, scholars, and the general public.

Several features mark the Workplaces: Pasts and Presents group as distinctive. First, the group that created the website is truly international, bringing together scholars, both senior and junior, from Germany, Britain, Argentina, Canada, South Africa, Turkey, and Bangladesh. Second, its embrace of digital humanities was born out of the group's collective ethos. We saw the digital realm as more than simply a set of technological tools. It held out the attractive promise of a democratic and egalitarian approach to scholarly work that heretofore has been performed in isolation and within rigidly hierarchical institutions. This democratic sensibility has allowed us to make decisions collectively and to consciously develop a working group where anyone can contribute their knowledge and research findings, whether they belong to a university or not. This is very important, as the Workplaces group includes scholars at various stages in their respective careers, situated in a number of academic disciplines, and working in different institutional settings.

The engine powering our turn into digital humanities is Omeka, an open-source web publishing platform that allows account users to create and collaborate on a website to display collections and build exhibits. We recently launched six virtual exhibits that should be seen as works in continual progress. They range broadly, from transnational auto worker radicalism, to worker identities in an Argentine steel plant; from the gendered nature of Bangladesh's garment workforces, to the image of the large factory and the status of women in Turkey; and from the traces of the factory's past for a reconsideration of factory in the global paradigm shift of industrial development, to the analysis of how federally employed documentary photographers in the US treated industrial labor in the 1930s and 1940s. Other exhibits will come online in future months, including one on the Ford Motor Company in Istanbul and another exploring labor and department store elevators in Johannesburg. These exhibits are meant not to simply share our respective ongoing research but to work toward a new kind of storytelling that integrates images, sound, and text. Crucially, they point toward new ways of working together in collaborative fashion despite our geographically scattered home locations.

It is worth noting that learning about digital storytelling and trying our hands at it was (and is still) a challenge for each one of us. This was especially true in terms of our creative process, which had to adapt to a number of technological challenges, such as coding for metadata, reformatting and uploading images, and navigating the confusing world of internet copyright. Having the support of both a digitally trained librarian and a programmer helped enormously in this regard. Working together, we devised a system of crafting flowcharts and storyboards, experimenting with layouts, and exchanging feedback on the emerging exhibits. Using Slack, a team communications platform, we were able to sustain virtual conversations across multiple time zones that often lasted for weeks at a time. That said, we realize that we have only begun to tap the potential of digital humanities. Only some of our exhibits make full use of multimedia, and we continue to struggle with the challenge of historical mapping—one of the most powerful tools in the digital kit.

Our podcast, Workplace Matters, can be found on our website (and other platforms) and shares with the larger project the aim of bringing together scholars with cutting-edge projects on labor, work, and space. It is consciously interdisciplinary. The first episode, released in the autumn of 2021, took the form of a moderated roundtable in which seven members of the group discussed a number of questions: How does a workplace-level analysis inform our historical understanding of capitalism? How has the workplace been studied and conceptualized in our area of research, and what are the limits of that approach? How can we study the workplace in an interdisciplinary perspective? Future episodes that explore the world of the waterfront as a worksite, teaching capitalism by focusing on the workplace, and worksites and memory are in production and will be released over the course of 2022 – 23.

In this COVID era, digital tools allow us to continue with collaborative work even as we remain isolated. We are planning thematic exhibits where other researchers from different parts of the globe will interact and work collectively. In sum, we are pursuing an aspirational goal of more fully realizing the potential of the digital realm: the promise of creating new sets of questions and transcending the mono-disciplines that have constrained us in the past.