Declaration to the Finnish people, 1905

'Declaration to the Finnish people', or the 'Red declaration' (named after the red paper it was printed on more than the 'red ideas' within the document) was read aloud from the City hall balcony in Tampere by labour poet Kössi Lindström (later known as Kössi Kaatra) during the General strike of 1905. The paper was both nationalist as well as socialist. The General strike was meant to show the strength of the labour movement and it gained lot of momentum. One of the effects was the Parliamentary reform, which gave the workers - and even the women - the right to vote.
poster
Finland
1905
Institute:
TKM 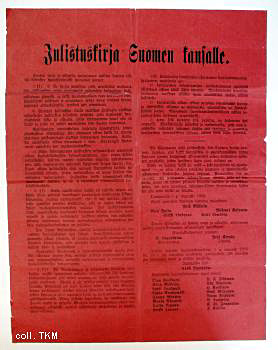