Low cost athletic activities like wrestling and boxing were popular among working class youth. In 1934, when this arrangement took place, the Norwegian labour sport organisation Arbeidernes Idrettsforbund (AIF) could celebrate its 10th anniversary with a membership figure of more than 50 000. Five years later the figure was doubled. Measured by number of members, AIF was the largest culture organisation in the labour movement. In 1936 an agreement was made with the traditional sport movement, and after the war the two groups merged.
poster
Norway
1934
Inv. Nr.:
807/P85
Institute:
AAB 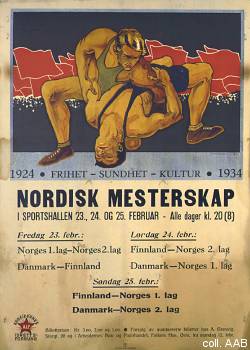