The Communist Party of Great Britain (CPGB) was founded in 1920 and tried but failed to affiliate to the Labour Party. At the 1922 election Communists like Shapurji Saklatvala stood as individual Labour candidates. The Labour Party’s 1924 Conference banned individual Communist membership, so Saklatvala stood again the North Battersea Division and won as a Communist with local Labour Party support. This made him Britain’s second Communist Party MP and third Black MP. Described by fellow communist Palme Dutt as ‘one of the greatest orators of our generation and beloved of the masses wherever he spoke,’ he dedicated the rest of his life to the cause of anti-imperialism and the struggle for socialism.
poster
England
1922
Inv. Nr.:
CP/CENT/ELEC
Institute:
LHASC 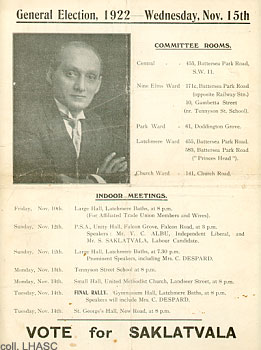