Editor: Jacques René Hébert. Le Père Duchêne it is a theatrical mask born within popular performances staged during fairs; it represents the common man ready to denounce injustices and abuses. At the beginning it was moderate, but later become a tool of propaganda among the masses. Newspaper, Paris published from 1790 to 1794
periodical
France
Inv. Nr.:
Per.Rari.121.75
Institute:
Fondazione Lelio e Lisli Basso 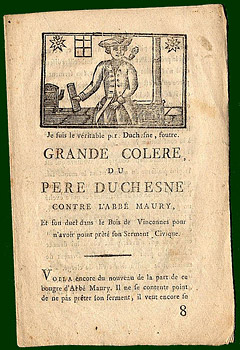