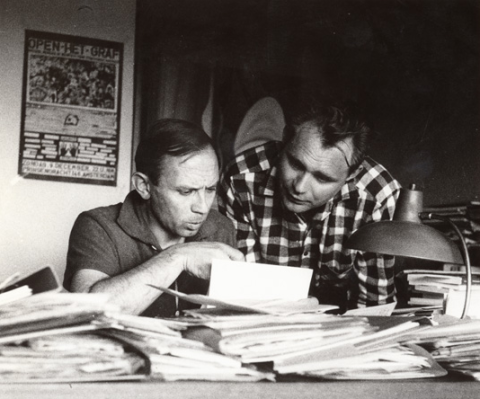 The ELHN Working Group Speak, Look, Listen! The Cultural Production of Work / Parler, Regarder, Ecouter! La Production Culturelle du Travail is concerned to explore the range of forms of workers' writing, and more generally workers' self-representation (including the use of song, painting, photography, film, and digital media), from the late eighteenth-century onwards; to examine the co-construction of such representations between workers and actors from other social groups; and to develop appropriate methodologies for interpreting these representations, and the ways in which they are archived.

At the Turin 2015 ELHN conference, the workshop theme was "the cultural history of the worlds of work", with a focus on understanding the reasons and conditions for working men and women to engage in writing, including as responses to a range of derogatory or stigmatising discourses aimed at their alleged behaviour by the powerful; while taking account also of writings by working men and women who did not engage with or support political parties or trade unions.  At Paris 2017, we explored the European history of worker's representations of the world of work "in and for the workers' world", including "amateur" cultural practices which form part of a cultural history seen from below. For the forthcoming third conference (Amsterdam, 2019) our focus will be on both written and visual representations, which constitutes an original approach insofar as these two fields of research are often separated. More particularly, this third phase of reflection will focus on the process of creation, or in other words the creative capacity of the workers: the capacity to write as much as the capacity to make workers' language visible through film, or to capture moments of work and/or life through photography or pictorial work - in the context of a transnational European history.

Two of the co-ordinators have contributed to a special issue of the European Journal of Life Writing (vol. 7, 2018; http://www.ejlw.eu), on the theme 'Life Writing "From Below" in Europe'.

The coordinators of the Working Group are: