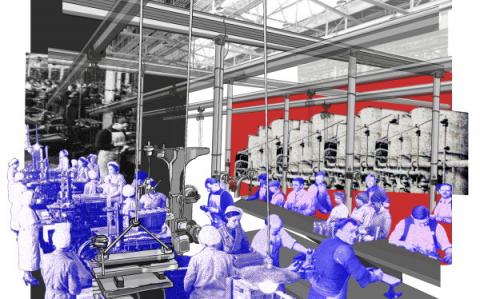 The ELHN Workplaces: Pasts and Presents working group brings together, in an interdisciplinary fashion, recent historical, sociological, anthropological and visual work that presents new methodological and epistemological perspectives on the study of capitalism at the point of production. With this call, we aim to bring together historians and social scientists of different hues, as well as museum curators, documentary filmmakers, to discuss new research and artefacts that focus on the past and present of the factory with a historical perspective. The focus is on thematic and methodological perspectives that engage with dimensions such as gender, race, the spatial and transnational turn, discourse analysis etc. that have cross-fertilised with the perspective of class that was traditionally adopted by the labour history of the factory.

The Working Group was established in 2013 with an initial focus on factories only and titled “Factory History Working Group.” We had started from the following observation: Since the 1980s, after the wave of de-industrialization and factory relocation that has characterized western economies, and with the historiographical interventions that changed the focus of labor history, the industrial workplace, along with the industrial worker, seemed to have disappeared from historians’ agenda. The alleged breakdown of class as an unitary category and the dispersion of labor across other thematic arenas after the 1980s, and for a generation, caused both to have receded within historians’ agenda, relegated to the backwaters of scholarship. After the wave of de-industrialization and factory relocation that characterized western economies, manufacturing, which was the very business that once gave these economies mastery over the east and the south was history, we were told, and, accordingly, the factory as a workplace and factory work as a specific form of wage labour seemed to have lost their relevance. What ensued was a questionable historical narrative predicated on the shift from an ‘industrial economy’ to a ‘knowledge economy’.

Over time and through a number of wide-ranging, and often interdisciplinary, panel discussions the group came to the realization that the study of the factories could not be dissociated from the study of the workplace at large, because methods of work organisation and management that once characterised the factory are now diffused in the service sector and in white collar jobs (call centres, logistics, fast-food chains, retail, just to name a few). We had over the years many relevant contributions from scholars who studied the workplace, but not necessarily the industrial one. Factory sites in themselves have also in time transformed to become museums, design hubs, business incubators. At close scrutiny the boundaries of “the factory” appeared blurred and an artificial distinction did not hold in front of the nuanced research that is now being conducted in the field of work and labour. Over the years, the conversation with anthropologists, sociologists, geographers, etc has enriched the perspectives of the labour historians that initially comprised the group. We therefore question whether the group is anymore only about history. We believe that the name Factory History is now too narrow to accurately describe the wealth of perspectives that make up the group. Given the above considerations, and after brainstorming and consultation with group members, we have decided to change the working group name to Workplaces: Pasts and Presents in October 2021.

The working group aims to map the field by inviting scholars to share information on recent research on workplaces. Calls for papers, news about forthcoming events and publications are circulated through the group’s e-mail list. Some members of the group published a special theme on factory history in Labor History. Members of the group have organised sessions together in several conferences and the working group is actively organising its own workshops (please see the links and documents below).

In November 2021, we launched our podcast series Workplace Matters, which features roundtable and interviews on the historical transformation of the workplace.

Since 2021, some members of the group have created virtual exhibits of their research. Members are invited to put themselves forward with a proposal to join this digital humanity project.

If you are interested in joining the Working Group on Workplaces: Pasts and Presents, please write to the co-ordinators with the following information: Name, Institution (if any), e-mail address, thematic focus/interest.

Görkem Akgöz is a research fellow at the re:work-IGK Work and Human Life Cycle in Global History. She is working on the history of early Republican Turkey from a gender perspective. She is also the co-chair of the Labour Network of the European Social Science History Conference. Email: akgozgorkem@yahoo.com

Nicola Pizzolato is a Senior Lecturer at Middlesex University. He is the author of Challenging Global Capitalism: Labor Migration, Radical Struggle and Urban Change in Detroit and Turin (Palgrave). Email: n.pizzolato@mdx.ac.uk

Workshop Program 2018 - Across the Post-Industrial Divide

Workshop Report 2018 - Across the Post-Industrial Divide